If you’re into craft beer and visit Craft Breweries, you’ll only need one look at this product and you’ll know what to do with it.

For the craft beer uninitiated: a Growler is a large 64oz vessel made of glass, ceramic or stainless steel used to transport beer (other sizes are available; most commonly 32oz and 128oz).

The best Craft beer is sold in Growlers. Generally, you can get growlers from Craft breweries but growler filling stations are starting to pop up in grocery and convenience stores, as well as in bars and restaurants.

The problem with growlers is that as soon as beer is poured into a growler, the beer inside that growler is on a collision course with the drain. Unless you drink it first.

It’s a race against time. You have a few days to open the growler (more time if your brewer injects carbon dioxide into your growler). But once you open that cap, you have about 36 hours before the beer is flat.

If you’re losing the time race with a Growler, you basically have three choices. You can find some friends to help you drink the beer, drink all of the beer yourself (hiccup!) or enjoy half the beer while pouring out the rest.

About the Growlerwerks uKeg

This brings us to the problem that Growlerworks is trying to solve with the uKeg 64 Pressurized Growler for Craft Beer.

uKeg took a vacuum insulated stainless steel bottle, with a variable pressure regulation cap and a draught style tap. The end result is a growler that keeps beer carbonated, cold and convenient. 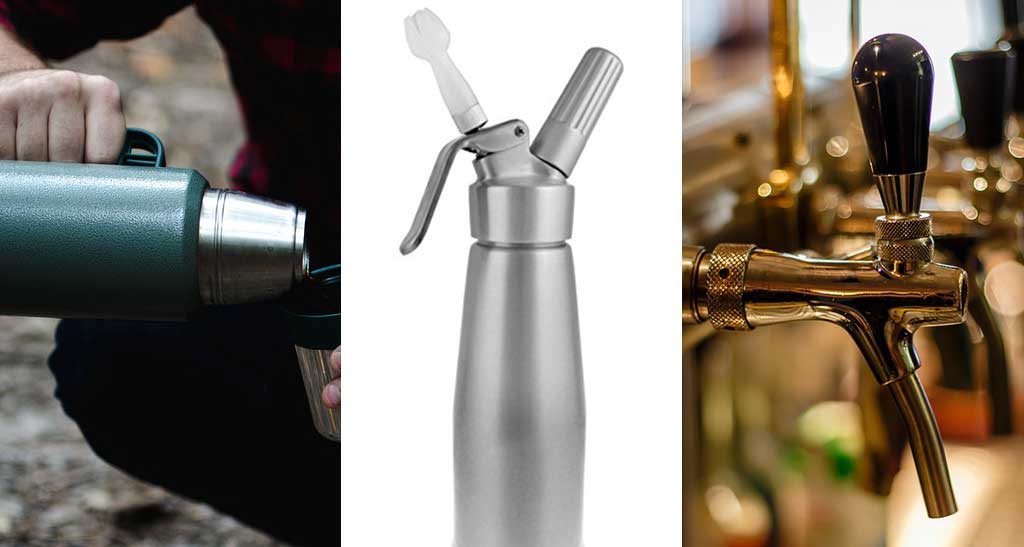 The uKeg combines a thermos, a CO2 whipper and beer tap all in one growler.

How Does it Work?

This product is basically like combining a classic vacuum thermos with one of those classic bar-style refillable whipped cream dispensers and slapping a keg handle tap on the top.

There is also a pressure gauge to ensure your beer is perfectly pressurized. Plus, there is a fill gauge to display how much beer is (or isn’t) left in the growler. 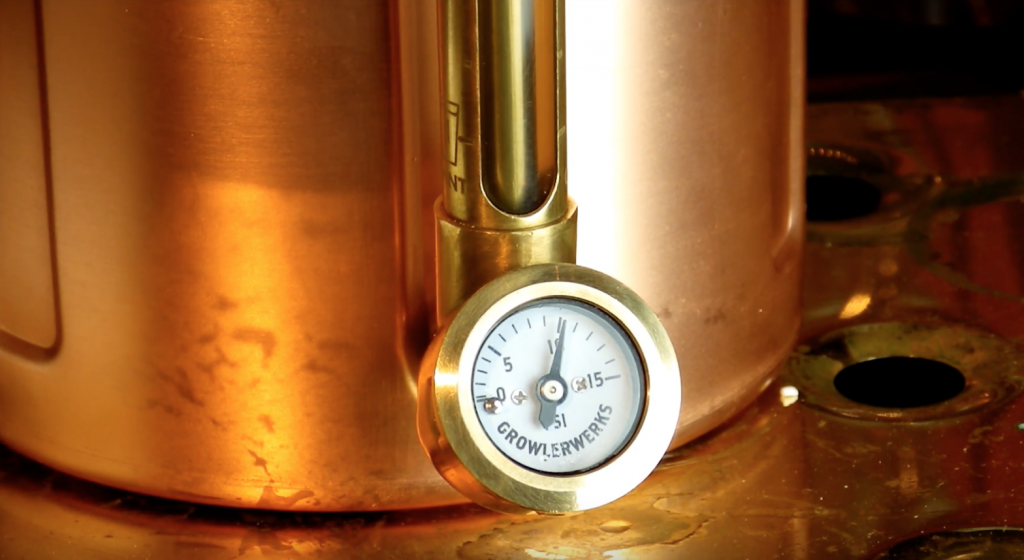 The uKeg includes a pressure gauge and a window to see how much beer is left.

There are four versions – 64oz and a 128oz versions in stainless steel and copper respectively. The smaller size is the traditional growler size; it’s good for about four pints. The larger, 128 oz size is good for about eight pints.

The only difference between steel and copper is the aesthetics and the price (the copper costs about 15% more and arguably looks a little bit better).

Each time you fill your uKeg, you’ll likely need a new CO2 cartridge. I have to be honest, when I heard that it was a deal-breaker for me. Then I read that the cartridges are the same kind that go in seltzer bottles and whip cream dispensers. They’re easy to pick up for way less than a dollar. Plus, that little CO2 cartridge will keep your beer tasty for up to four weeks. I reconsidered my position because that’s a solid return on investment.

One thing that Growlerwerks mentions is that it might be better to buy two 64oz uKegs, rather than a single 128oz uKeg. That way you can get two kinds of beer if you need it (plus two small ones are probably easier to manage and also fit in the fridge). Of course you could solve the two beer problem by buying two 128oz uKegs! 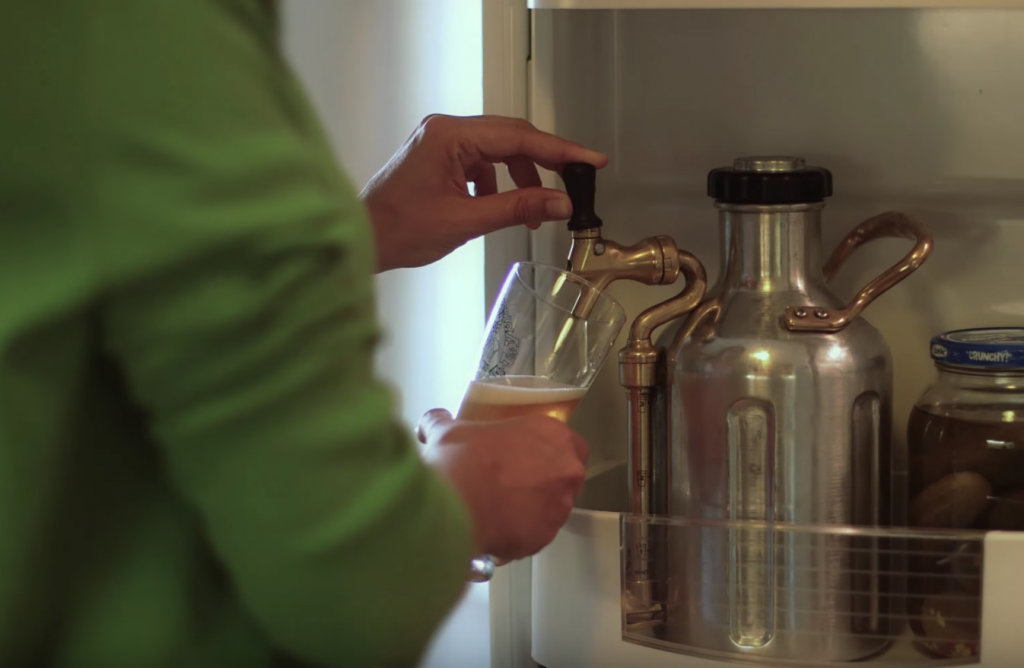 Pouring a draft beer from my fridge? What a great idea!

Portland Oregon is arguably ground zero for America’s recent craft beer explosion; it’s not a surprise that uKeg grew out of the Portland craft beer scene. In October of 2014, the company was founded by three friends with engineering roots that were tired of pouring good beer out of their growlers and into their drains.

The original uKeg was designed in June 2014. Then preproduction and manufacturing planning began.

Not surprisingly, the company’s original funding, came from Kickstarter. Believe it or not, 10,293 Kickstarter backers pledged $1,559,525 to fix the problem with growlers. That’s a huge amount of people for this category. Clearly, a lot of people love this idea.

Growlerwerks planned to ship in the summer of 2015.

The original launch has been controversial. Growlerwerks has been very open about the process on their Kickstarter page and in email communication with backers.

The company has also had quality problems in the past, which seem to be largely resolved. They were also hit with a patent lawsuit. Small business is not for the feint of heart.

Growlerwerks had to make the difficult decision to finance the unfulfilled crowdfunding rewards by selling the uKeg in retail locations. People that had sponsored the Kickstarter are still waiting to receive their uKegs, even though they can buy them on Amazon. 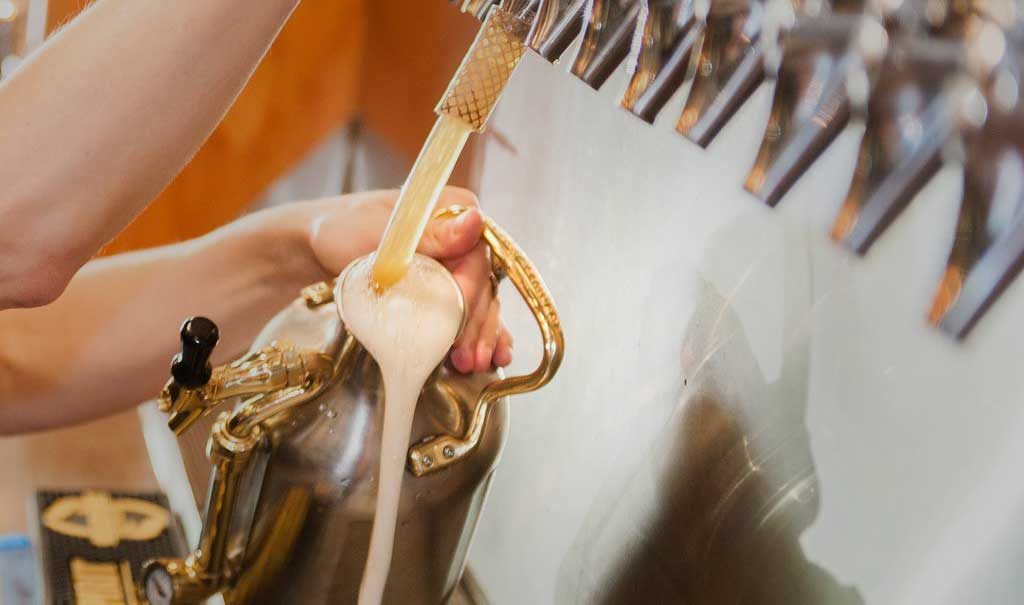 Filling the uKeg is just like filling any other growler

There are a few squeaky wheels in the Kickstarter forums, on their Amazon reviews and on social media that just want their rewards. Those original backers are disappointed that you can buy the uKeg online, but they haven’t seen theirs two years in, even though they were an original Growlerwerks uKeg backer.

But this happens with a lot of Kickstarter campaigns. Pebble, Ouya, Coolest Cooler and countless others have made their backers wait while selling retail.

I think that Growlerwerks is trying to make things right, but have been overwhelmed by the company’s early quality problems. It seems like they have things in order now though, despite a few growing pains in the past.

They will mail you special tools if you have problems with your uKeg and even replace defective units. If you buy it from Amazon, they also seem to be standing behind the product. 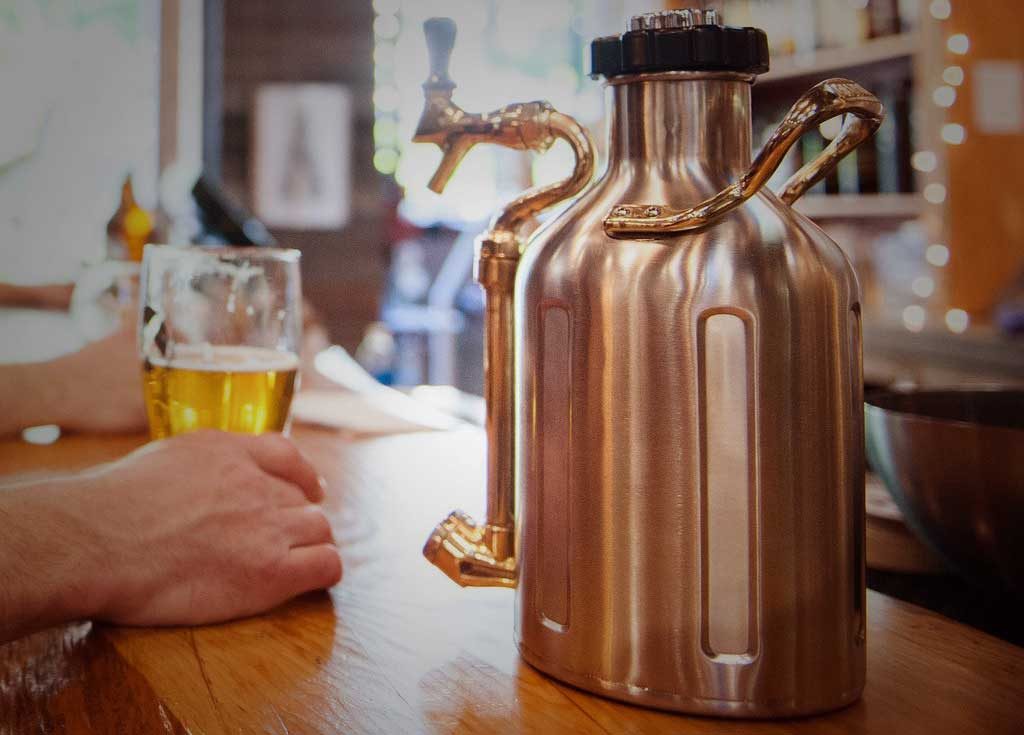 I don’t think that the Growlerwerks uKegs are for everyone. That said, it is an exceptionally unique piece of hardware that solves a big problem in the craft beer industry.

First of all it’s pricey, but so is craft beer, especially if you drink it often. If you drink enough beer, this could save you money in the long run though. It’s definitely cheaper than cans.

There is a small chance that you may have problems getting a good uKeg but they’ll make sure that you do if you have to return it. Judging from online reviews, it seems like the vast majority of people are getting good uKegs. And they love them.

However, there are a vocal minority of people that have problems getting their uKeg to work. In the unlikely event that this happens to you, you have to deal with returns or getting special tools sent from Growlerwerks to fix your problems. But they will fix the problems. They stand by the product.

This thing is awesome when it works. In fact, there are lots of people that change their reviews once they see their uKeg working. Growlerwerks has lots and lots of happy customers.

That said, I’d check with my local brewery to ensure that they will fill the uKeg. Some (cagey) craft beer makers only want to use their own vessels. Ask at your local first.

Most breweries are staffed by beer lovers that have never seen the uKeg and are excited to fill one. I expect that this won’t be a big problem for most people, especially in cities with lots of craft brewery choices, but it’s best to check first where you plan to fill it. 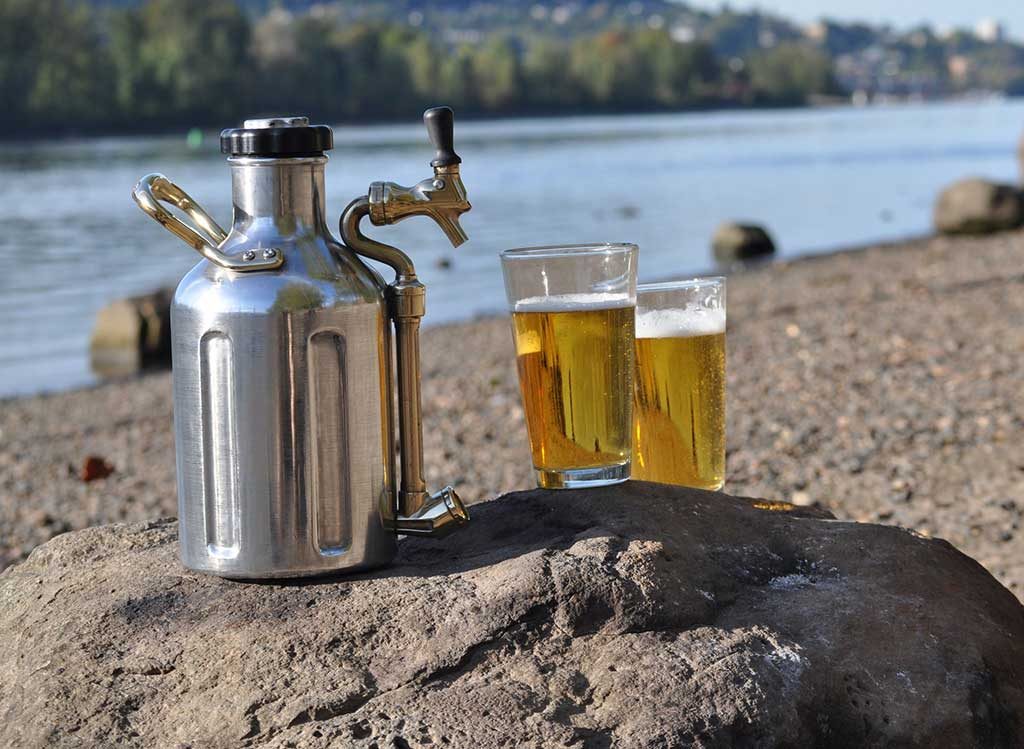 Cold draft beer on the beach? Who can argue with a uKeg?

There isn’t a lot of competition for the Growlerwerks uKeg. Like a lot of great crowdfunded projects, if the product already existed, they wouldn’t have raised so much money to create it. They have found a need in the market and are addressing it.

However, if you’re just looking for an insulated growler and don’t care much for the carbonation and pouring features of the uKeg, you have a lot of different options. Otherwise, you’re looking at the uKeg or the Drinktank with the Keg Cap (keep reading).

The classic toolmaking brand Stanley has an industrial looking bottle that will keep 64oz of beer cold for a reasonable price.

For something more stylish, MiiR offers an insulated growler.

Lastly, crowdfunded, Bend Oregon based Drinktanks offers the Keg Cap accessory that will turn your a 64oz or a 128oz Drinktank Growler into a pourable version with same pouring functions of the uKeg. Note that Drinktank is the company that filed suit against uKeg. 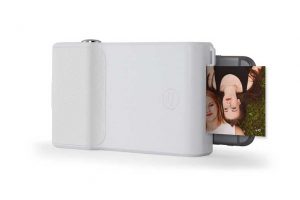 Prynt is bringing paper photos back. If you’re old enough to remember a time before digital photos, you likely have albums full of printed photos stashed around your home. In those days, you blindly took photos through an analog viewfinder and hoped for the best. You waited until you had a whole roll of film […]