I live near a large body of water. I can see it from my upper windows when there aren’t any leaves on the trees (yay water view property!) I want to kayak on that water, but I don’t want to drive a kayak down to the water. The ultra portable Oru Kayak solves my problem. You may have even seen Robert Herjavec invest in the company on Sharktank.

If either of these things are stopping you from buying a kayak, you probably want to take a look at Oru.

The Oru Kayak is a high-performance collapsible kayak. Designed by paper folding, this origami kayak folds neatly into a box that is only 29 x 13 x 33 inches in size (the Bay model) – about the size of a large suitcase.

The result is a level of portability that is unmatched in a hard kayak, especially for a boat that costs less than $1200. There are definitely portable inflatable options, but they just don’t offer the performance that Oru provides.

Once unfolded and in the water, the Oru very much becomes a conventional kayak. You can use regular paddles, off-the-shelf spray skirts while keeping up with your friends in regular kayaks. There is a small comfort sacrifice reported by some users, but the portability more than makes up for a bit of miscomfort.

First and foremost this is a folding kayak. Oru claims that you can go from box to boat in 5 minutes, but that’s going to take some practice. The first few times it will take closer to twenty minutes, but as you get better, it will get easier.

In terms of longevity, Oru has rated the Bay Kayak to 20,000 folds. By our math, that’s 54 years meaning this is likely the last collapsible kayak you’ll ever buy.

You can get a really good feel about how the kayak packs and unpacks from this video that Oru created:

The kayak folds to create the carrying box itself. This seems like a small detail, but it’s not. It means that the box comes with you when you leave shore – you don’t have to worry about storing or carrying the box.

The bulk of the boat is built from a high quality double-layered marine-grade polypropylene, making the Oru line of portable kayaks exceptionally durable.

Oru has put together this video of various abuses to their fold up kayak, including hitting it with a hammer, dropping it off a roof and launching it off rocks.

It should convince you that you’ll be able to make the Oru last:

You might think that a packable kayak would be ugly, but you’d be wrong. The Oru is a well structured, beautifully designed piece of ingenuity. In fact, it’s so beautiful that it’s been included in the San Francisco Museum of Modern Art!

The cockpit is reinforced by a pair of bulkheads which adds a rigid feel for smooth paddling and surprisingly straight tracking performance for a boat that turns into a backpack.

The cockpit is comfortable for most people, due to the foam seat and adjustable backrest. The footrests/footpegs are also fully adjustable, letting you crank in the perfect fit.

Every Oru has rubber deck straps that allow you to keep fishing gear or an extra layer close.

There are also lots of accessories, like a fishing kit, safety kit and soft pack available from the Oru website.

Criticism of the Oru Kayak

The Oru is great but not perfect. Some users report being uncomfortable in the cockpit. Oru has addressed some of the concerns in their newer models.

It’s not great for tall people, so check the Oru site for height and weight recommendations before you buy.

Some users complain about it being difficult to turn over after a spill, but most kayaks are, depending on water conditions. Our solution was to just not spill!

There’s also no waterproof storage in the boat, so you’ll have to make use of dry bags to keep anything completely water safe. In our experience, that’s usually a good idea even in the driest of dry compartments though.

In conclusion, there are people that have a hard time assembling the Oru, claiming that it takes twenty minutes to do, not Oru’s claim of five. We don’t think that this is a big deal either. With a little practice, you’ll be assembling it in no time. There are some great videos available that show you just how to do it, like this one:

The Oru kayak was originally designed by Anton Willis when he moved into a small apartment. He didn’t have room for his prized fibreglass kayak, so he was forced to put his boat into storage.

That gave him the idea to create an affordable origami kayak. Starting with paper and quickly building up to full scale models, he had a foldable kayak prototype. He tested it out in lakes and waterways around the Bay Area and hit up Kickstarter in November of 2012 and reached their $400,000 goal within a month, selling 500 boats.

They wanted the funds to scale the company – bringing their production costs for each kayak from $505 to $300. After a lot of predictable accolades and back and forth from the Sharks, Robert Herjavec agreed to invest the money for 25% of the company.

With Herjavec’s infusion of capital, the company was poised to grow.

There seems to be a bit of a formula for crowdfunded niche products like this. Make them of a high quality, charge a premium for them and make them in America. Like the URB-e portable scooter, Oru is built in Southern California.

By using this formula, the company founders essentially become the quality department. The result is a product that almost no one complains about. And when they do, the companies respond. It’s counter-intuitive to the “go to China and find a factory” strategy of product development, but it’s a good way to produce a quality product that people want. 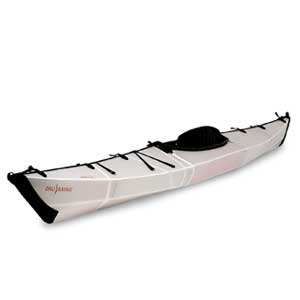 I live near a large body of water. I can see it from my upper windows when there aren’t any leaves on the trees (yay water view property!) I want to kayak on that water, but I don’t want to drive a kayak down to the water. The ultra portable Oru Kayak solves my problem. […]